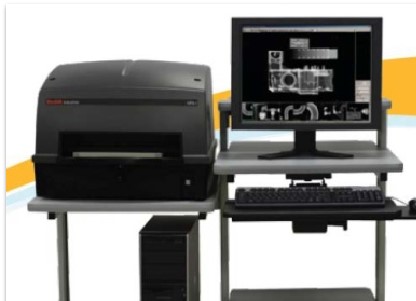 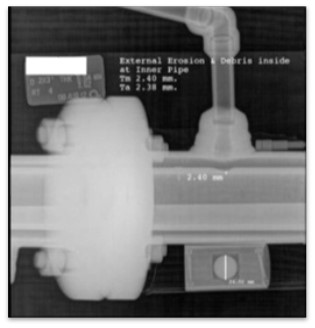 • Computed Radiography (CR) uses very similar equipment to conventional radiography except that in place of a film to create the image, an imaging plate (IP) is used. The imaging plate is placed under the object to be examined and the x-ray exposure is made.

• instead of taking an exposed film into a darkroom for developing in chemical tanks or an automatic film processor, the imaging plate is run through a special laser scanner to read and digitize the image.

• The CR imaging plate contains photo stimulable storage phosphors which store the radiation level received at each point in local electron energies. When the plate is put through the scanner, the scanning laser beam causes the electrons to relax to lower energy levels, emitting light that is detected by a photo-multiplier tube (PMT), which is then converted to an electronic signal.

• By adjusting image brightness and/or contrast, a wide range of thicknesses may be examined in one exposure, unlike conventional film based radiography which may require a different exposure or multiple film speeds in one exposure to cover wide thickness range in a component. Computed radiography often requires fewer reshooting due to under- or over-exposure.

• Images can be enhanced digitally to aid in interpretation.